I was pretty excited when I found out that I was chosen through ShesConnected to be one of three Canadian bloggers to be Ambassadors for the Toshiba Excite Tablet.

I put together this little video of the Toshiba Excite tablet to show you why it is perfect for the busy, everyday family.

A few days after the tablet arrived, my husband was leaving for a business trip. I decided to send it along with him to see what he thought of it before me and the kids got too attached to it…here is what he had to say.

To all of those who have been paying attention to the tablet world, you know there are lots and lots of options out there.  However there is one out there that has caught my attention and I would like to tell you about it.  When you hear the world Toshiba there is no doubting that one of the first thoughts that come to your mind is computers, so the fact that Toshiba is in the tablet market is a logical step with its great Toshiba quality.  I recently had the chance to test drive the Toshiba Excite tablet AT200 and was surprised at how durable, versatile and easy to use the tablet was.

As far as durability goes I think I put the AT200 to the ultimate test.  I recently returned home from the frozen Arctic of Northern Canada where the temperature in March reached an easy -40 daily.  This tablet helped me while on several bumpy plane rides, truck travels and enduring the hardships Mother Nature likes to dish out in the unforgiving Canadian North.  This tablet not only survived, but thrived.  While on assignment I used the tablet to take notes, pictures, keep track of my daily routines without complaint from the TOSHIBA EXCITE.  The abuse this machine was put through during my 1 week trek of the great white north proved to me that this is one tough machine that is capable of much more than I thought.  Even being transported over 6 small airplane transfers this tablet took many “punches” and still preformed thanks to its thin sleek design and tough metal case.

As for versatility, there is no ending to what this tablet can be used for.  From shopping lists, cook book references, surfing the web, playing games, entertaining the children on long car rides to anything else you can think of, it can do it.  Even as recently as tonight, I had the tablet open on my tiny counter while looking up a recipe on the internet and had stereo quality music playing in the background, all while receiving e-mail.  Now that is handy.  Even the camera has many uses.  While on my trip up north I had a standard digital camera, however I found myself using the tablet more than the camera due to it more shooting options which produced better quality pictures.  Even though it only has a 5.0 mega pixel camera, I still found that because of the various shooting options, this camera performed in all sorts of harsh shooting conditions.

Like any Toshiba tablet, it comes with an Android 3.2.1 OS and is plenty powerful enough for standard use.  I have made use of the Android Marketplace and downloaded several games and apps and have not run into any issues while operating them.  My tablet came with a 16 gig internal memory, however there is a 32 gig model available; but if that is still not enough room, there is a slot for a micro SD card so your memory needs knows no bounds.  There is also an HDMI port and a micro USB port.  And if you seek wireless connections this device comes with both Wi-Fi and Bluetooth connection options.  Surfing the net from your tablet has never been easier.

As far as being user friendly, I am not sure you will find a tablet that is more user friendly than this one.  With a simple to use touch screen that works easily with my sausage fingers, you will have no issues using this wonder tool.  All applications are activated with a simple “click” of your finger on the touch screen and there is a reassuring vibration from the tablet to let you know that you have activated the app you want to use.  Even the icons on the screen are a size that makes it easy to view on its large 10 inch screen. 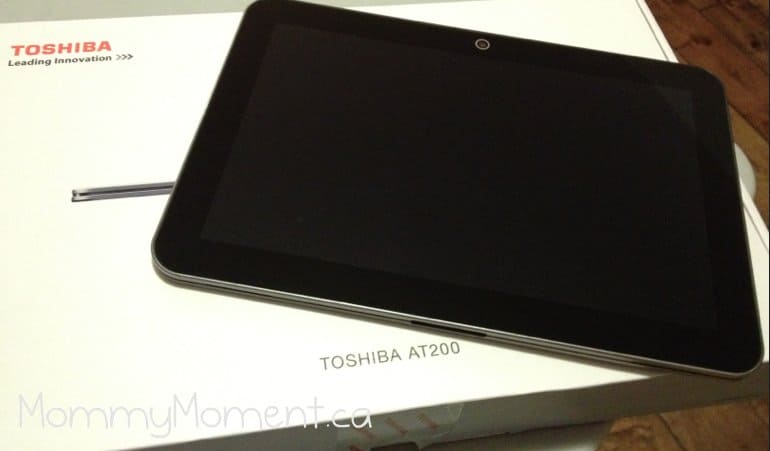 If you are in the market for an ultra-light, ultra-thin tablet, this is it.  With plenty of power, strength and endless uses you will not be sorry you have this in your home, office, car, or anywhere.

Thanks Toshiba Canada for giving me the opportunity to review the Toshiba Excite, it is absolutely perfect for our busy family!

[...] and brands and formed many long-term relationships. Through ShesConnected I was selected to be a Toshiba Brand Ambassador and Chicken [...]

It's a very nice tablet!

I am so tempted to buy one now! hehe!

I never realized how much we would use it till I got it, and now I don't know how we lived without it LOL...I especially love it for recipes and for cuddling up and reading before bed! Thanks for the comment :)

Looks nice and portable, that is so important when on the go. Let us know how the screen holds up with the kids.

So far so good, no trouble with it yet and it gets used a lot!

So when are you going to be giving one away? :)