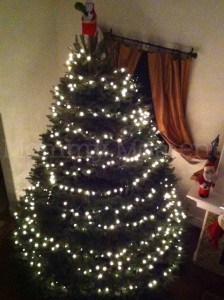 This is the week that they mayhem begins.  The decorations will go up this weekend.  The holiday cards will finally be ordered.  The party invitations will start rolling in.  The holiday music will be on repeat.  The shopping lists will be finalized, and the lists for Santa will be written.

It’s official; the holiday season is upon us.

I have to admit that I love every second of it.

I love the smell of a fresh cut tree in my living room.  I love baking and cooking and baking some more.  I love buying gifts and wrapping them in shiny, beautiful paper.  I love creating Christmas memories with my kids.  I love the look of wonder on their faces when we read stories about Christmas.  I love the sheer joy in their eyes when they walk down the stairs on Christmas morning and find their piles of gifts.  I love every precious second of it.

Whatever the reason, I dislike it now more than ever.

As a mother I fail to understand the necessity of putting a young child, sometimes even an infant, in such a stressful situation.  All for the sake of a photo.  A small holiday keepsake.  If you can call it that.

The picture on “Santa’s” lap.

It’s not that we never met Santa growing up.  We made the trip to Santa’s Village and saw him at the local mall.  It’s just that my parents never forced us to actually sit on his lap.  I remember wanting to give it a try at some point, we had made a special trip after all, and with three siblings we did everything as a group.  Safety in numbers, don’t you know.  But it didn’t feel obligatory.  Like I was required to sit there for that photo.

Somewhere along the line, sitting for a picture with Santa became some sort of “rite of passage”.

Parents force their kids to sit on a strange man’s lap and try to coerce them to smile.  The children whimper until they scream.  Santa appears mortified much of the time, this is a once a year gig for him.  He’s not trained in toddler calming techniques.  You can hear the hysteria start to form in the parents’ voices.  On some level, they are embarrassed by the scene they’ve created.  It’s a losing battle for all involved.

Particularly for the kids.

It’s a mixed message if ever there was one.

We tell them to stay away from strangers.  We hold their little hands and keep them close and signal them when it’s ok to interact with an adult.  We call the plays.

But once a year parents throw their kids on the lap of a scraggly older man in a worn suit and fake hair and tell them to smile.  Parents leave their children in the arms of a total stranger and then walk away.  They don’t rescue the kids when they start to scream.  No, no, no…they want that picture.  They jump up and down and make funny faces.  They sing and dance and try to get just one little smile.

All for the sake of a picture.

For the life of me, I can’t understand it.

My kids, like most, are curious about this alleged “Santa” who just happens to be at the mall down the street from their home every day during the month of December.  They like to stop by, wave, say hello, and check out his “house”.  To date, they haven’t had their picture taken.

My daughter is talking a lot about wanting to take a picture this year.  She thinks it might help Santa remember her list a bit better if she actually meets him in person.  Logical thinking for a four year old.  I can see her trying to talk herself into it.  She wants to take a chance this time, like she did with the Easter Bunny last spring.  She thinks she might really be ready.

There’s just one catch.  She wants to bring her little brother with her.  My son wouldn’t sit on Santa’s lap for all of the candy canes in the North Pole.  He is weary of strangers and generally unwilling to give anyone in a costume even a fragment of a chance.  He just won’t do it.

If she sees Santa and decides that she really wants to take that picture, I will be right by her side.  I will step back if she asks me to, but I won’t make her do it alone.  There’s no bravery badge for sitting on stranger’s lap, after all.

I love the joy of the holiday season.  I love the lights, the smells, the sparkles, and the wonder that it brings.  I love the excitement in the eyes of my children and the feeling of pure happiness that washes over us.  I love giving back and teaching my children that there’s more to Christmas than candy canes and gifts.

I even love those Santas.  From afar, anyway.

I just don’t love the “rite of passage”.  I don’t love the idea of forcing kids to do something so scary all for the sake of a picture.  I don’t love watching or hearing other children cry out in fear as their parents dance around and wave from behind the camera.  It seems to me that this is the opposite message that the holiday season is meant to bring.  It’s hard to celebrate togetherness and family when small children are left to cry in the arms of a scary looking stranger.

Perhaps this makes me a bit of scrooge.  I’m certain that some of you are shaking your heads, thinking that I’m overprotective and over the top.  It’s ok.  I’ll take it.

I just won’t scare my kids at my local mall.

What are your thoughts on this “rite of passage”?

Katie is a Child & Adolescent Psychotherapist/Parenting Expert in Los Angeles, CA.  She has a four year old daughter, three year old son, and a rock and roll husband who makes her life complete. Katie has a parenting advice blog, Practical Parenting, and can also be found on Twitter.

You are invited to a #MagicSanta Twitter Party December 1st with Gift Card Prizes!

« Tis’ the season & there’s no better way to be jolly than with a GetTheBest #MagicSanta Twitter Party!
Total SHE ~ unique, personalized gifts #giveaway {ARV $400} »

END_OF_DOCUMENT_TOKEN_TO_BE_REPLACED

0shares
We use cookies to ensure that we give you the best experience on our website. If you continue to use this site we will assume that you are happy with it.Ok