No bake cheesecake!  What an easy way to serve a top notch dessert to your company.

Now, combine that cheesecake with a rich moist brownie, and man you have a quality dessert right there.  And top it with some fresh strawberries, ah, perfection! 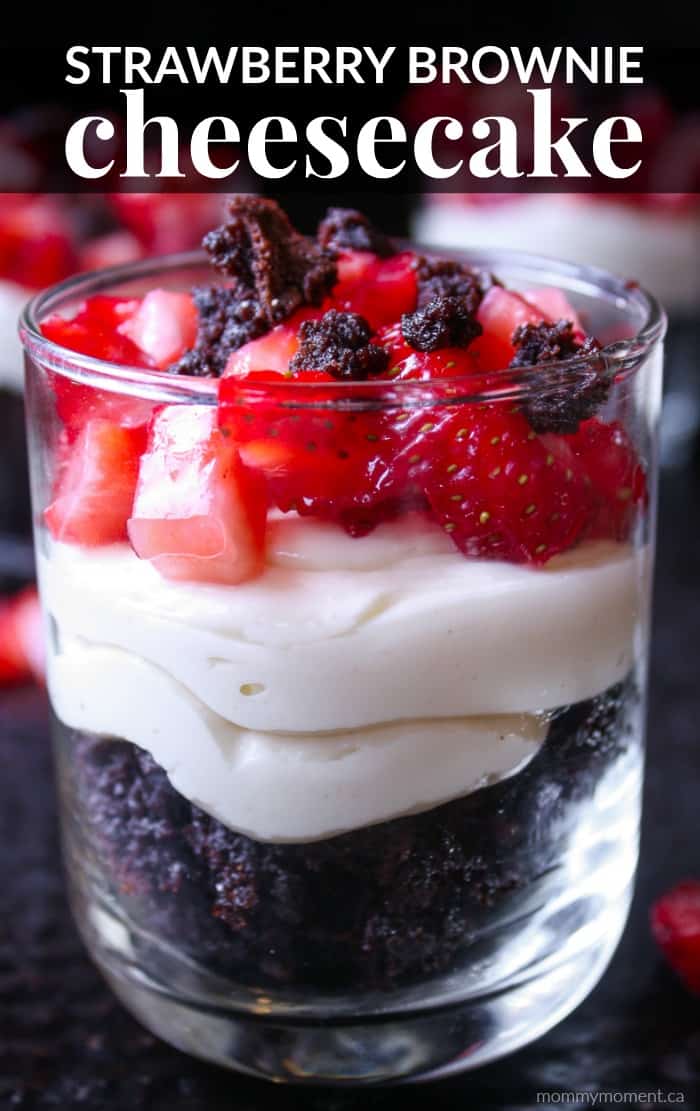 The first step is baking the brownie in a pan and letting it cool.  This brownie recipe is the best one around, no joke. And I’ve struggled greatly with brownies trying to find the best one.  They were my baking nemesis for the longest time.  I’ve had underbaked brownies trying to keep them chewy, and overbaked brownies making sure they weren’t gooey.  I’ve had brownies that were too fluffy, and ones that were overpowering in cocoa.  Let me tell you, many a brownie recipe has caused me headaches, but not this one!  It has never failed me. 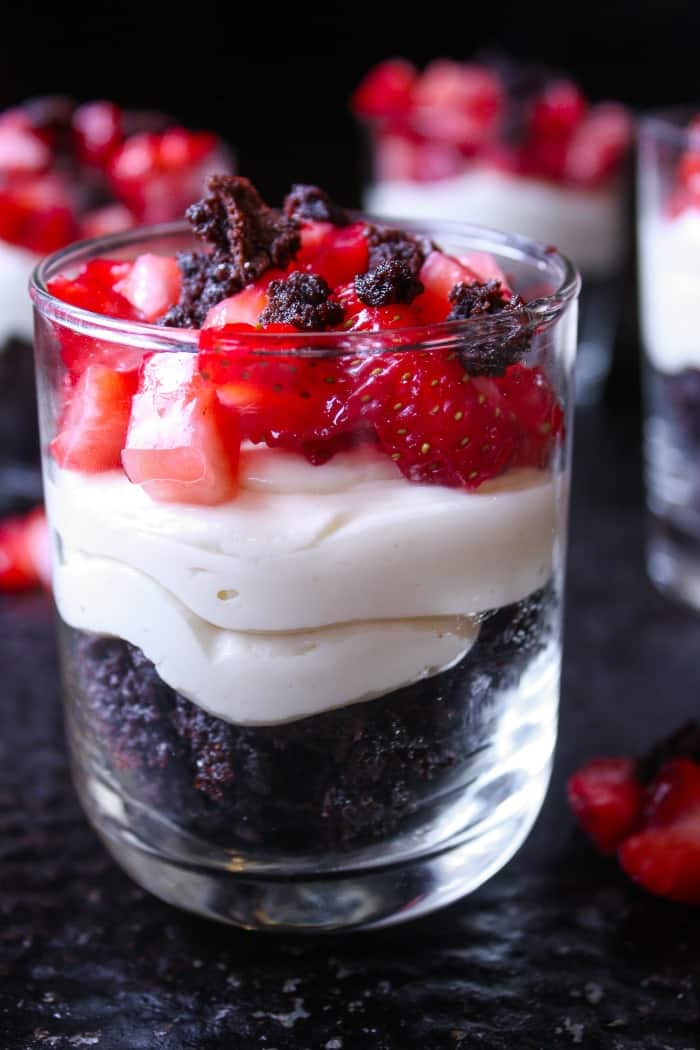 The toothpick should come out almost completely clean when you insert it into the brownie, and that is when you know it is done.  Works everytime for me!

Once your brownie has cooled you can crumble it into a small cup or mason jar.  I just went to the Thrift Store and found a dozen small cups of various shapes, and used them for this dessert. Use whatever you have, or go and thrift like I did! 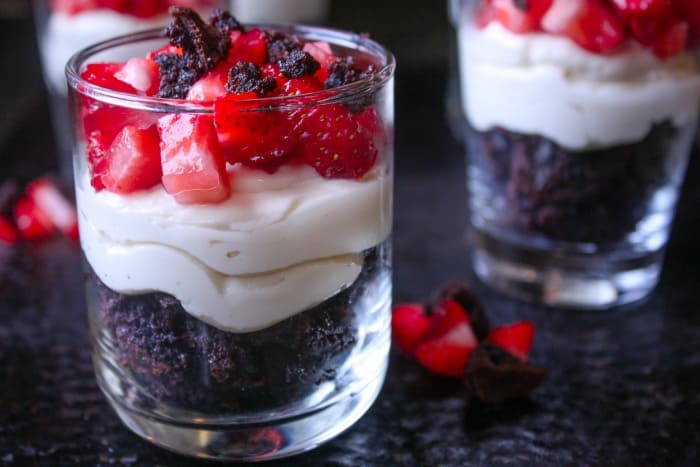 For the next layer, I put the cheesecake in a piping bag and piped it into the cups.  The reason I did this is to keep it from getting messy.  Trust me, pipping it will make your dessert look way neater, and if you don’t have a piping bag just clip off the corner of a ziplock bag and that will work just as well.

Now add your fresh strawberries on top, and a little extra of that brownie crumble and your dessert is company ready!

I have also made this recipe by baking the brownie right into a mason jar instead of baking the brownie in a pan and crumbling it.  Your brownie won’t need to bake as long if you are doing this variation, but it’s another fun way to serve this delicious treat. 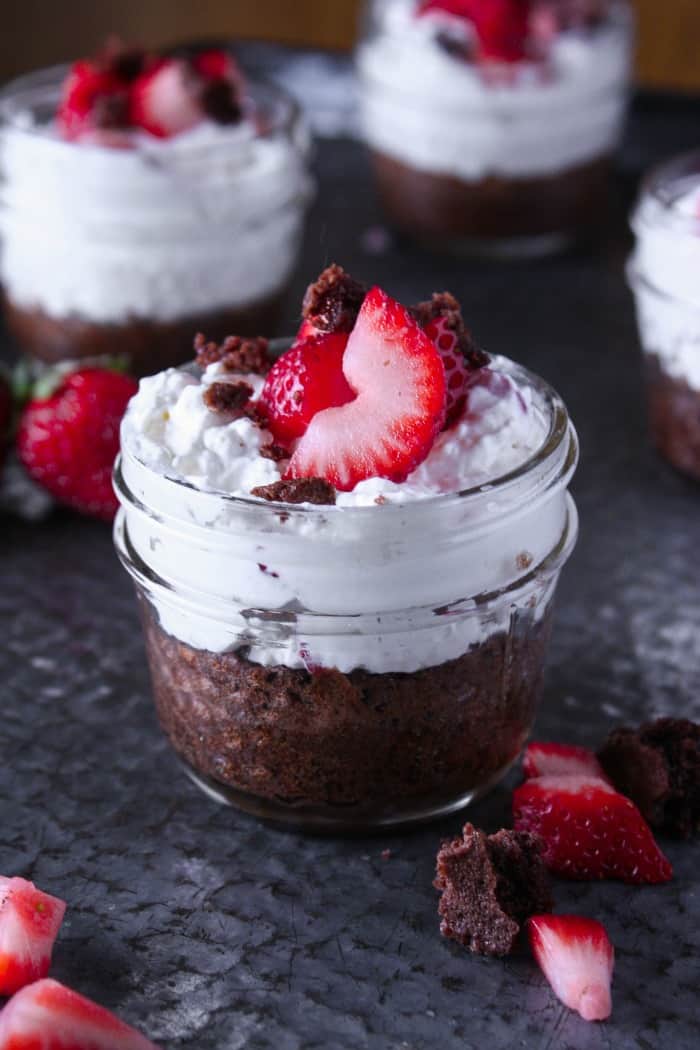 *I had a little extra brownie left over, but it depends on your cup/jar size.  If you do, you can put it in an airtight container and it will keep for a few days.

I’m Megan. I love to bake! I am a 19-year old student in my second year of Bible college, and after this year I plan on going through a baking and pastries program to learn more about baking. One day I hope to work for a bakery or maybe even own my own bakery! For now, I love baking for friends and family and we’ll see where God takes me in the future. If you want to see more baking check out my Instagram @baking.memories.

This post contains affiliate links for your shopping convenience.

I was looking for agreat dessert recipe for New Year's Eve - and I found it here! My favorite combinations of strawberries, chocolate and cheesecake!

Wow, this looks delicious. I love what a nice presentation it makes as well.

This is my kind of dessert! Quick, easy and delicious! (And portion controlled, too, when you put it into a small container!) <3

Oh wow, these are all of my favourite things!