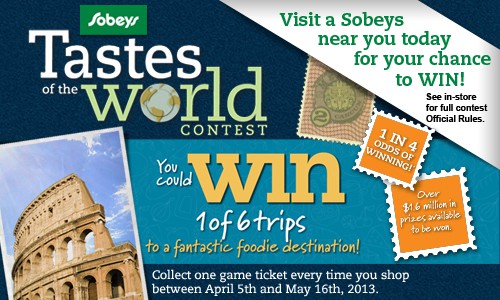 The Sobeys West Tastes of the World Contest

How would you like to go on an all-inclusive foodie vacation?

The Sobeys West Tastes of the World Contest which runs from April 5th – May 16th is sure to be a popular one. When you visit your local Sobeys store, you will be able to pick up a game board and pieces.

The top prizes are 6 all-inclusive foodie vacations to:

This contest is ONLY available in Sobeys Stores in Manitoba, Saskatchewan, Alberta and BC.

Head on over to Sobeys West Tastes of the World Contest for more details!!

Follow the host @MommyKatandKids and @MommyMomentBlog who will be tweeting out the winners.

Who: Anyone can participate in the party, but only people living in Manitoba, Alberta, Saskatchewan and British Columbia will be eligible to win.

Oops, not sure if I properly signed up as I have a red x by my name. Can you confirm for me. Also, indicates that sign up ends in 18 days, but the party is tomorrow?

The x is just if you want to take your name off the list. The party is on the 16th, next week :)

@MommyMoment It states above "Be sure to RSVP below (***You must live in MB, MB, SK, BC***)" No AB? Or do you just love MB so much you gave it 2 spots? lol I'm looking forward to the #SobeysWest twitter party and I live in AB ;) I had so much fun at the #LoveSobeys twitter party last month.

Yes, AB :) Made the edit, thanks for letting me know!