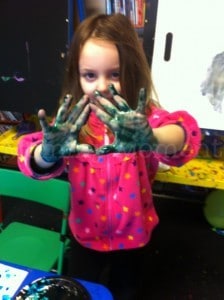 Some kids are very rule-oriented.  They like to know what is expected of them at all times, and they will generally do things exactly as they “should” be done (according to the rules, anyway).  They might even make up their own rules from time to time.  Try to change something around in my son’s bedroom and you will get an (very loud) earful on “the rules”.

These kids tend to be well received when it comes to preschool classrooms, birthday parties, and other places full of kids.  These are the “easy” ones.  The ones who do what is expected of them and stop playing/start cleaning up at the appointed time.  Most of the time, anyway.

“He’s so sweet and cooperative”, “he’s such a great listener”, and “don’t you just LOVE him” are often said about my son.  Yes, I do just LOVE him.  And he is sweet, cooperative, and prone to following the rules.  Believe me, when I’m racing to clean up the family room before bath time, this does come in handy.

Other kids are not as rule-oriented, but very creative all of the time.  They still like to know what is expected of them, but they might just need 5, 10, 15 more minutes to finish a project before they can possibly clean up.  They are more likely to bend the rules or claim ignorance.  Sometimes, they might not hear the rules because they are deep in the creativity zone.  Try to get my daughter to stop a project mid-way through and she truly won’t hear a word you’re saying.  Her creative vision can’t be stopped.

These kids can be the hard ones in the classroom.  Although my daughter is quiet, sweet, and always polite at school, she has a hard time transitioning between activities at times.  She likes to complete her vision, be it a mud pie or a painting, before moving on, regardless of time constraints.  A teacher once approached me with a concern about hearing loss.  It turned out that the teacher wouldn’t let her finish her project and she wasn’t willing to stop until it was done.  So she just pretended not to hear.  We’ve since remedied that with some better coping strategies.

In some ways, I’m lucky.  While my son does love his rules, he also loves to be creative.  While I sometimes wish my daughter loved the rules a little bit more, her creativity is inspiring.  They both know how to think outside the box.

My daughter received a design-you-own apron kit for her birthday.  It comes with iron on decals and fabric paint.  She looked at the picture on the front of the box for a while… 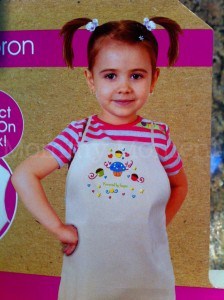 And then she came up with this.  Much better.  Much more “her”. 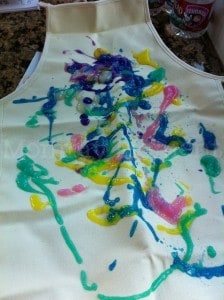 Fostering creativity is so very important.  I hear the complaints of parents who don’t want to deal with glitter, paint, and glue everywhere.  I get it.  So much so that I created an “art room” in the corner of our garage.  There the kids can reach their own art supplies and glitter and paint to their heart’s content each day.  And…they still have days where the glitter, painting, and gluing is best done at the kitchen table.  I don’t mind.  I would much rather have a messy house full of creative minds than a sterile home with kids who only ever follow rules.

It’s the creative minds, after all, that approach the world in a different way.  It’s the creative minds that see sunshine when there’s rain and hear music when a broken toy makes a repetitive clicking sound.  And if they ignore a few rules once in a while?  I won’t sweat it.  Perhaps they will come up with a better rule instead.

How do you foster creativity in your children?

Katie is a Child & Adolescent Psychotherapist/Parenting Expert in Los Angeles, CA.  She has a five year old daughter, three year old son, and a rock and roll husband who makes her life complete. Katie has a parenting advice blog, Practical Parenting, and can also be found on Twitter.