After sharing this DIY LEGO table on Facebook, people started adding photos of their own Lego table ideas, the below post has been submitted by one of our readers as a result of her photo getting liked on our Facebook page over 1000 times. 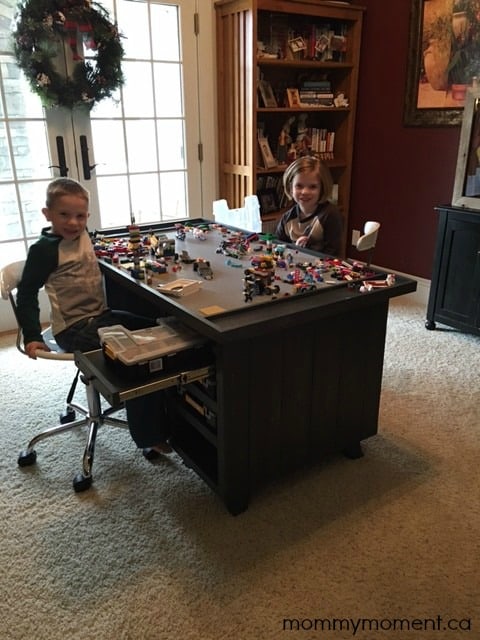 I love LEGOs. The creativity and imagination needed to play and build is a fantastic outlet for my plugged in post-millennial littles.

Grace and Elijah are 7 and 5 respectively and earlier this year we decided Monday through Friday would be screen free for them. The result has been a resurgence of their love of LEGOs. Each morning they wake the other up with this whisper, “Hey… want to go play LEGOs?”

All year they were building on this awesome lego table my mother had built them for Christmas a few years ago.

It’s awesome! Very cute, but as you can see, while a great size for one small builder, they were rapidly outgrowing the space. Now that they (and their LEGO collection) had grown, they needed a bit more room to build without encroaching on the other’s ‘land’. 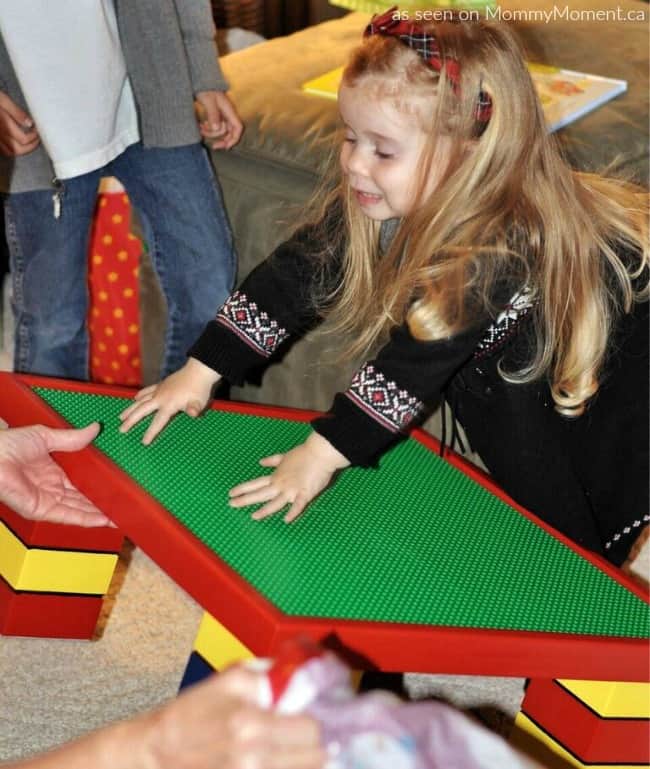 So, I went online and saw a lot of awesome LEGO DIY ideas. None of them were exactly what I had in mind though.

Enter my secret weapon: My mom.

My Mom is a self-taught craftsman who can build just about anything I can dream up. We’ve collaborated on an awesome shadow box coffee table, a recliner desk that slides over the outstretched recliner for long nights of editing pictures, bookcases, and many other projects. She is really amazing.

My Mom started wood-working over 30 years ago building my baby brother a wooden train set. From that one project, she has added equipment and tools until now.

Her shop would be the envy of any wood enthusiast! So I called her up, mentioned what I was thinking about and she said, “Let’s do it!” 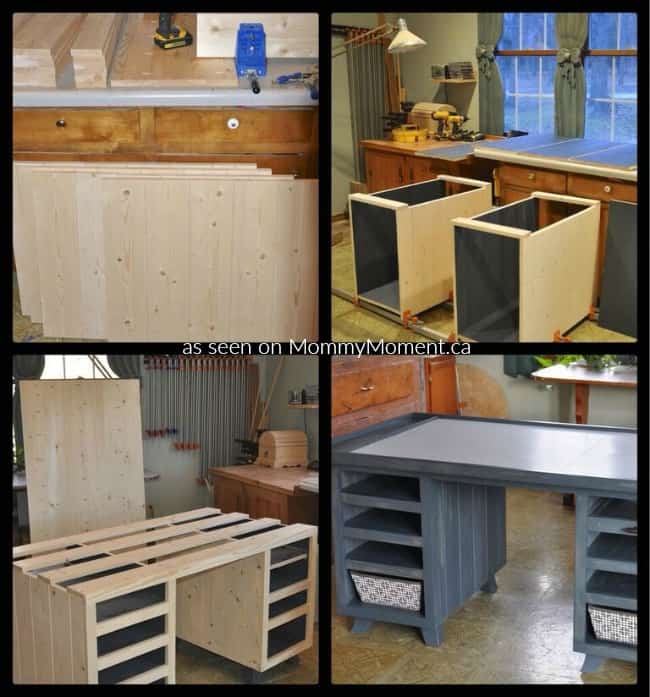 Over the next few months we talked about needing to draft up some LEGO table plans, and then finally in October (with Christmas looming closer) we put our thoughts down on paper. Collaborating over text messages and pictures sent back and forth, we finally came up with the perfect table.

And Mom went to work in her shop.

I’ll pause here in the telling of this story to take a moment and explain how important it is to set examples for your children. As I think back over my life I can see a lifetime of hobbies and new ideas my mom has taken on.

She has always challenged herself to try new things. She took time to pursue her own interests and I never, not one time, remember feeling like she was choosing to spend time away from me.

I think we mothers can tend to feel like we should put our dreams and interests on hold until our kids are out of the house – but if we do that we miss out on teaching them an important lesson! Pursuing your interests is important! Feeding your own creative soul is what nourishes you with the strength to feed your little one’s creativity. And as they see you taking care of yourself, they grow up with the knowledge that they need to take care of themselves.

My Mom continues to inspire me. She is a few years into retirement now and will turn 71 in a month. Mom is a vibrant, funny, engaged woman with tons to offer the world. Here’s to all the moms and dads who are embracing their retirement phase and living life to the fullest.

On with our story: 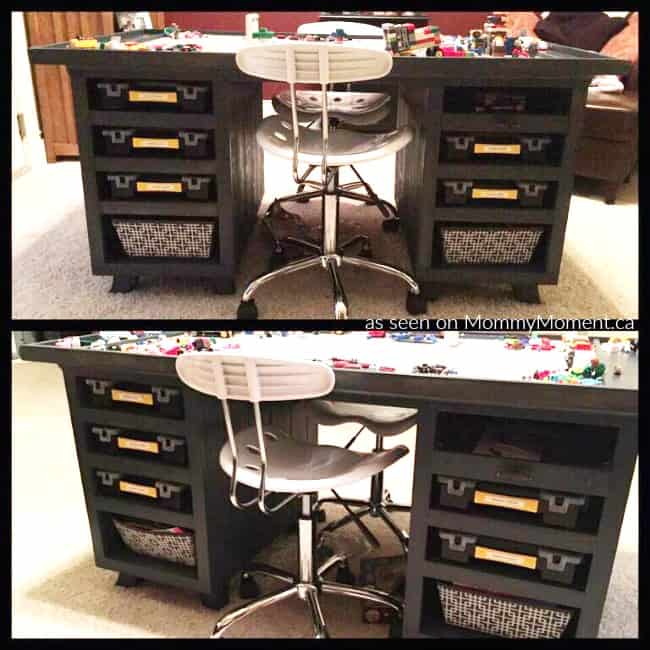 Next thing I know, despite my mom’s phone calls to say she may have bitten off a bit more than she could chew (I knew this was just a little creative demon of hers talking and ignored it:), she had been to the lumber yard, then she had a frame built, then some staining was done, then a few more things added.

And just two weeks later she called to say it was done! She built the entire table over a two week period in between watching her twin three-year-old and one-year-old grandchildren! Did I mention she was amazing!?! I didn’t see any of these ‘in-progress’ pictures, opting to be surprised with the finished project. 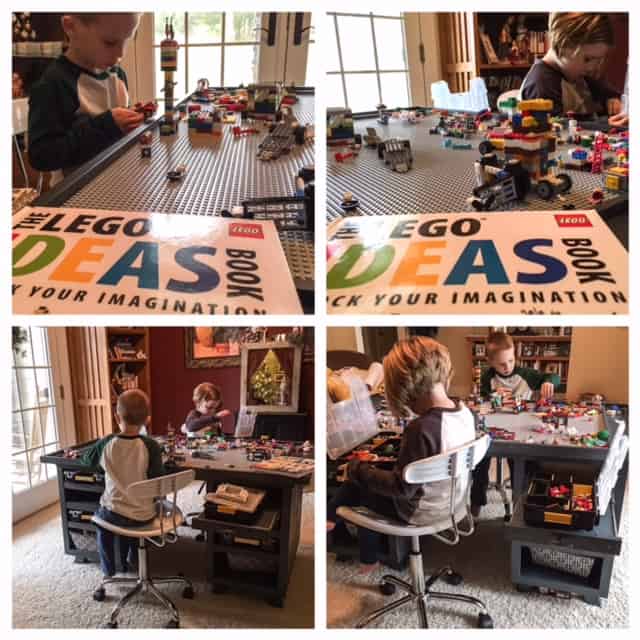 She gave it to the kids Christmas Day and we had it back home, set up, and in use by the next day at 10 am!

The kids love it and have spent hours building their own worlds on each side, and visiting the other’s world with their LEGO characters. 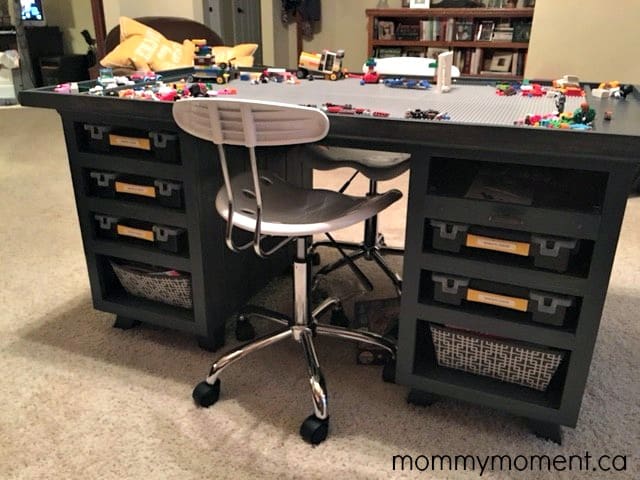 Lots of intense negotiations around story line have taken place as well. Here’s a picture from Sunday afternoon…

We are storing the LEGOs in Stanley Light Tool Sorters which we found on Amazon for less than $6 a piece. The legs and the chairs were also from Amazon. The desk features a slide out shelf on the top right of each side for setting plans, or whatever LEGO box they are using.

One last funny aside: On the way home from Mom’s Christmas, I was explaining to Grace how special the table was. I was telling her how many hours Grandma spent building it and that there was not another one just like it in the world because I had designed it and Grandma had built it! She took that all in and replied in her sweet innocent voice, “Well, I think Grandma did a whole lot more than you did.”

To which I would say, “Amen to that!”

(Many people have asked for plans since posting this as a comment on one of Mommy Moment’s earlier DIY LEGO bulding table on Facebook. We are working to get the Lego table plans on-line and will provide a link in the future on this post.)

This is a guest post contributed to Mommy Moment by Julie A.

This is so innovative! I would totally make a DIY table of Leggos if I had kids I love the drawers too!

I love the lego table idea. My kids could really do with one!!

That is fantastic. I wish I had one of those for my kid when he was young. He would have loved it.

This is really nice - Davey would love one of these for his room. Showing this to Dave - I think he could make the table.

Wow that table is fantastic!! We are, well my boys and the hubs are HUGE LEGO fans! I'm just glad they love such a great toy that does amazing things for their imagination.