What better day than CANADA DAY to introduce you to one of my FAVORITE products that boasts Canadian Pride?!?

Let me introduce you to:

We had a new little girl arrive at our door the other day. Our oldest daughter is thrilled. Taryn, one of the Canadian Maplelea girls has a new home and new best friend. 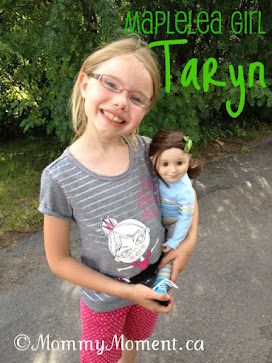 What makes a young girl growing up in Canada, well, Canadian? Six-to-12-year-olds from Halifax to Winnipeg to Whitehorse now have a collection of beautifully detailed dolls to inspire national pride while learning the wonders of their country. Known as the Canada’s Maplelea (may-pull-lee) Girls, the first six dolls of the series are ready to educate youngsters about Canada’s culture, heritage and geography.

Meet huggable and lovable Jenna, Taryn, Brianne, Léonie (lay-oh-nee), Saila (sigh-lah) and Alexi, 10-year-olds who hail from across the country. Each doll stands 46 cm (about 18″) tall and has a soft body with arms and legs that can be posed. Their eyes open and close and their hair is a delight to comb and style.  Each doll retails for $99.99.

Imagine having a social studies lesson by playing with dolls. That’s the concept behind the collection. All of the Maplelea Girls arrive with a distinctive 64-page journal illustrated with doodles, photos and writings done by the doll character to tell about her life and the part of Canada she calls home. Canadian girls will discover fascinating locales within their own country.

Taryn is an outdoor lover who loves to learn about the environment and wants to explore Mother Nature.  She loves hiking and has lots of accessories that help her including a pack back and hiking boots.  She describes herself as “an environmentalist at heart” and says the three things she couldn’t survive without are her hiking boots, clean fresh mountain air and butterflies. Seeing that my daughter also has a passion for the outdoors and the environment these two seem like a perfect match.

Like all Maplelea girls, Taryn has a positive attitude towards family, friends, self and life in general.  This makes her a great role model for young girls and can help them along the way as they search for themselves knowing there is a strong girl peer they can look up too.  These dolls are full of personality and make a great partner to my daughter. 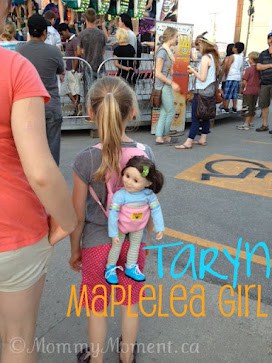 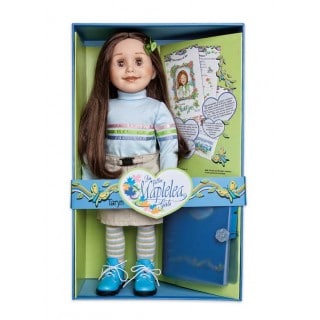 Maplelea’s commitment to quality and value are always evident in all their products and Taryn is no exception to that rule.  All her accessories are quality made and just like all Maplelea dolls, they come in an attractive sturdy box that can be used as storage for the doll when not in use.

Taryn comes ready for the outdoors with a striped turtleneck, her khaki skirt with buckle closure, funky striped tights and her oh-so-comfortable hiking boots. Her long brown hair is held back with a tiny leaf hair clip.  She is ready to play with right out of the box and since she has arrived in our home, there are been few moments where she not been at the kitchen table, along for car rides or even in bed with my daughter.

Get the little girls in your life a new friend and someone she can look up to that is mommy approved. (This is a great gift idea for a Christmas gift!)

Taryn is the second Maplelea girl that has joined our family. Don’t worry, Saila has not been left behind. My daughter says that Saila and Taryn are great friends and they always tell each other cool things about the places they each are from.

My daughter wants to save her money to get each of the Maplelea Girls. She says it is sad that they can not all be together…

I am so thrilled that Maplelea has offered to giveaway one of the Maplelea Girls to a lucky reader! This is one of my favorite giveaways as I know this gift will be treasured by a special child for many years to come!