Christmas is that time of year when we cuddle up on the couch as a family and watch our favorite Christmas movies.  We’ve compiled a list of the best Christmas movies of all time!  No matter what type of movie you are looking for, we have something for everyone on this list! 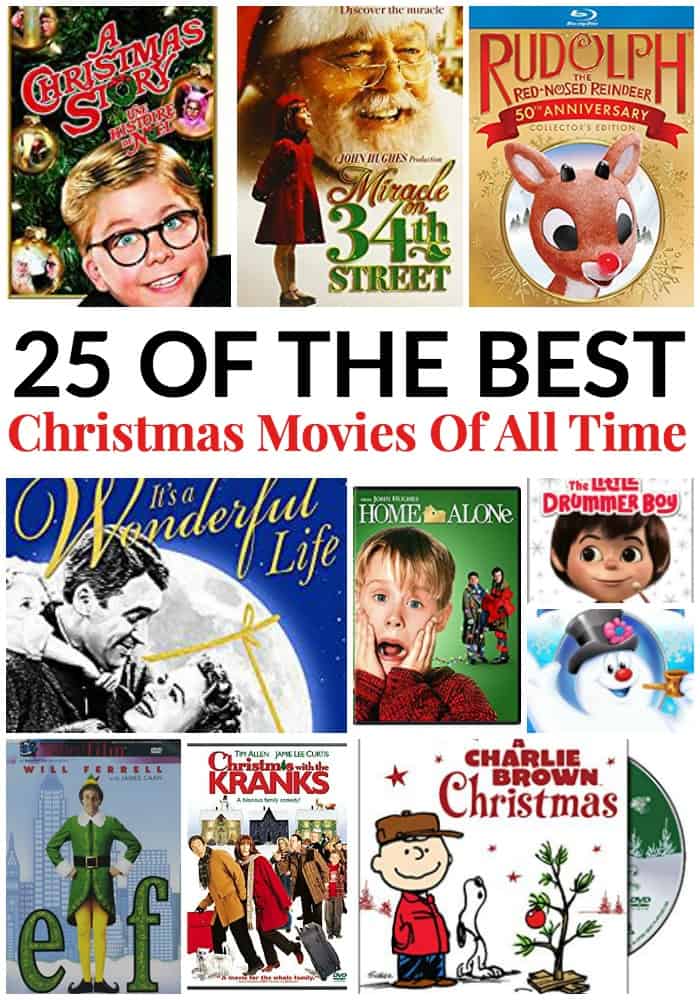 25 OF THE BEST CHRISTMAS MOVIES OF ALL TIME

This page contains affiliate links for your shopping convenience. The links help support the blog as we may earn a small commission at no extra cost to you, our readers.

What’s a Christmas play without a Christmas tree? But everyone makes fun of the short, spindly tree that Charlie Brown brings back – until the real meaning of Christmas works its magic once again.

“You’ll shoot your eye out!”. Possibly one of the most recited line from any Christmas movie. Hilarity ensues as Ralphie, along with his friend, try to convince Ralphie’s parents and teacher, that a Red Ryder BB gun is the perfect Christmas gift for a nine-year-old boy.

With retired Grandsanta, a rebellious young elf, an old sleigh and some untrained reindeer, Arthur sets out on a crazy mission to deliver the last present of Christmas to a child who was missed.

CHRISTMAS WITH THE KRANKS

Luther and Nora Krank decide to book an island cruise to beat the yuletide blues and just skip the holidays. But their decision to boycott tradition has the whole neighborhood in an uproar!

New York City Detective John McClane, armed with only a service revolver and his cunning, launches his own one-man war against terrorists. A crackling thriller from beginning to end, Die Hard explodes with heart-stopping suspense and is a Christmas tradition for many!

This funny Christmas film tells the tale of a young orphan child who mistakenly crawls into Santa’s bag of gifts on Christmas Eve and is transported back to the North Pole and raised as an elf. Years later Buddy learns he is not really an elf and goes on a journey to New York City to find his true identity.

This movie classic from 1969 is a celebrated holiday classic that brings plenty of yuletide cheer with the hot and cold story of the jolly Frosty.

A beloved movie filled with great music, likable characters, and striking effects, Frozen is a fairy tale about overcoming obstacles and the power of true love. (And you will NEVER get the song “Let it go!” out of your head)

Accidentally left behind when his family rushes off on a Christmas vacation, two burglars are trying to break in, and Kevin’s rigging a bewildering battery of booby traps to welcome them.

One year after Kevin was left home alone and had to defeat a pair of burglars, he accidentally finds himself in lost in New York City, and the same criminals are not far behind.

HOW THE GRINCH STOLE CHRISTMAS

Every who down in Who-ville likes Christmas a lot, but the Grinch who lived just north of Who-ville did NOT! A fun Dr. Seuss Classic!

I’LL BE HOME FOR CHRISTMAS

Disney presents the hilarious comedy adventure that celebrates the believer in all of us. Jake Wilkinson is a self-centered college student and has one thing on his mind – to get home for Christmas dinner or forfeit the vintage Porsche his father promised him. Just days before his deadline, Jake awakens in the California desert — stranded and penniless, wearing a Santa suit and white beard!

An angel is sent from Heaven to help a desperately frustrated businessman by showing him what life would have been like if he had never existed. Another Christmas classic from 1947.

JINGLE ALL THE WAY

This holiday comedy features a father determined to buy his son that “must have” Christmas toy during a frantic shopping spree on Christmas Eve.

This delightful romantic comedy follows eight couples (headlined by an incredible roster of stars) whose lives intersect shortly before Christmas.

This classic tale centers around a department store Kris Kringle who spreads the joy of Christmas by making a little girl believe in Santa Claus.

The Griswold family is back at it as they plan for a big family Christmas. And predictably it turns into a big disaster!

Follow this classic story as the most famous reindeer of all gets the opportunity to pull Santa’s sleigh!

In this holiday classic, the true spirit of Christmas is revealed when a lonely orphan stumbles upon the birth of the baby Jesus and affirms what the holidays are really about giving and love.

The Muppet characters tell their version of the classic tale of “Scrooge”, an old and bitter man who transforms on Christmas Eve.

THE NIGHTMARE BEFORE CHRISTMAS

Jack Skellington, the Pumpkin King of Halloween Town, longs to spread the joy of Christmas. But his merry mission puts Santa in jeopardy and creates a nightmare for good little boys and girls everywhere!

On one special Christmas Eve, as the boy skeptically waits for the sound of sleigh bells, a magical train appears outside his home and the conductor (voiced by Tom Hanks) invites him aboard. What lies ahead is an extraordinary adventure of self-discovery.

When a man accidentally kills Santa on Christmas Eve, he finds himself magically recruited to take his place – red suit, beard and all!

White Christmas is a musical romantic comedy from 1954 and features the well-known song “White Christmas” by Bing Crosby. A true classic!

Which is your favorite Christmas movie of all time?

My family watches Elf every year. What a classic!

I just watched Elf again this year- one of my favourties.