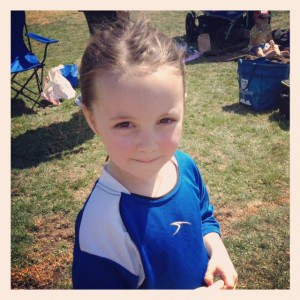 I’m starting to feel like a broken record.  It seems as if I just can’t get beyond that one annoying scratch.  The one that inevitably leaves you repeating the same lyric over and over and over again.

My daughter plays soccer.  She loves it.  She loves to dribble, she loves to run, she’s a great offensive player (and maybe avoids defense just a little bit), and she’s always in it for the fun.

She enjoys playing against her friends from school.  It gives her a little added social time on the weekends.

She really, really loves her uniform.  And the sweatshirt with her last name and number on the front and a dolphin on the back?  Well, that was a dream come true.

Some games are fun.  There is no score keeping in this division…well, there isn’t supposed to be. The under 6 division is intended to teach the kids a few skills while focusing on a love of soccer.

And while my daughter’s coach is all about giving your best and having fun, there are some very competitive teams in this division.

And by teams I mean parents.

Some kids are being coached on the side…you know, to increase their goal-scoring abilities.  On some level, I understand the private coaching.  If a child really likes something, why not give them some extra time doing that thing?  But at age 5?

Other kids are encouraged (or not discouraged from) aggressive playing.  During the last game, one little girl pushed three players on my daughter’s team to the ground.  Twice, her coach gently reminded her that pushing isn’t allowed.  After the third push, I stepped in and told her that she would have to sit down if I saw another push.  The most surprising thing about it?  Not a single parent on that child’s team seemed to react in any way when she pushed my daughter to the ground.  If I hadn’t stepped in, the behavior would have continued.

Is winning that important at age 5?  Does aggressive playing build a healthy level of competition?

Overheard from the sidelines…

Why do they stop the games every time someone falls?

We need to toughen these kids up!

Has a person wearing a soccer cleat ever stepped on you?  It’s not good, I can assure you.  It doesn’t toughen anyone up.  It just hurts.

What is the message we are sending when we focus on winning and competition?

And yet, many parents choose otherwise.  It’s baffling, really.  With all of the talk about bullying, social skills, and stressed out children…why can’t parents wake up to the fact that you have to model the behaviors you want to see in your children?

You have to be the person you want your child to become.

It’s time to dial back the competition, make friends with the parents on the other team, and cheer for all of the players (win or lose).

It’s time to build a better generation of good sports.

Because that, in my opinion, would be the biggest win of all.

I agree with you. It doesn't stop even when they get older. I attended my best friend's daughter's boyfriends college game Tuesday evening. I was so frustrated. One player from the other team was ready to put the ball in play right by our bleachers. He was cussing out a member of our team. Very bad language...in front of my 8 year old daughter! I was like.."Enough of that. That's just wrong. No need for that in front of children. ". I turned to my friends and said "I could take him out!" He looked right at me with a scowl. Oh well, maybe it threw off his game. One game I was at the men from the opposite team was yelling obscene things at our women's team. I want to go support our children, but who are these kids? Who are their parents? Who raised them to yell mean things with words I can't even say without blushing! Where's the sportsmanship in all that negative behavior? What does that say about our coaches that allow the players to behave that way?