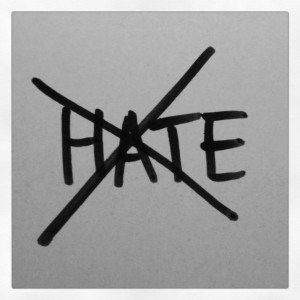 I have a thing about negatively charged words most often said in anger.  I really dislike them.  Sometimes I feel like I might be alone in this.

What does hate mean?

I stopped what I was doing and came face to face with my daughter.

You heard that on Clifford last night.  I remember.  I wish they wouldn’t use that word.

I sat her on my lap and began to explain…

Hate means that you really, really don’t like something.  That you never ever want to do that thing.  It’s a word people tend to use when they’re really angry.  It’s a word that hurts people’s feelings.  It’s not a very good word at all.

She listened closely, staring deep into my eyes.

It doesn’t sound that nice.  I don’t like it either.  I heard a kid say it at school too.

I hugged her close and breathed in her innocence.

We all try to avoid allowing our children to hear the so-called “bad” words.  No one wants to be the mother of the toddler yelling one of those unfortunate words in the supermarket, after all.

But who decided that the only bad words are the ones that fall under the title of “curse words”?  Why do we have to stop there?

Hate is an emotionally charged word that conveys great anger.  Hate can lead to yelling, physical aggression, and violent crime.

Hate causes racism, sexism, homophobia, and just about every other form of intolerance.

Hate often has its roots in ignorance.

Hate is a cruel and nasty word that hurts people right down to their souls.

I don’t hate much, but I do hate hate.

And when I hear small children throwing hate around like it’s no big deal?  It breaks my heart just a little bit…

Kids don’t have to like everybody and everything…but living with hatred creates negativity.

Won’t you join me in erasing hate?

agreed - it's a word they don't need to use but one they will hear. Mine have said it, we've had a talk about it - same with stupid. (and I'm guilty of saying something is stupid without thinking first - I try to use silly instead, though) And we talk about feelings - especially how they make others feel or how it would feel to them if it was said/done to them. Tolerance is key, so then, I guess is teaching them not to say/do certain things that could lead them down a different path. Great post!

I have always been so proud that my daughter only knows of the "H" word (hate) and the "S" word (stupid) as bad words we do not use. It is becoming increasingly difficult as she gets older and participates in lots of different activities though. So many kids say it. I get very frustrated when I see it.

I always tell my kids Hate is a strong word, and I don't like it. I also STRONGLY DISLIKE idiot. Can we get rid of that one too?!

Oh yes, oh yes, oh yes. I am avidly against hate, dumb, and stupid. (And unfortunately one of my daughter's cousins says stupid a lot.)